Hywel Dda (880-950), Prince of Wales is a man every cat lover needs to know about.  He truly was someone special and very deservingly was known as “Howell the Good”.

In the year 936 he passed laws about cats to ensure protection of our favorite animal.

He argued that an animal with such high value as a pest-controller should be respected and protected in society. 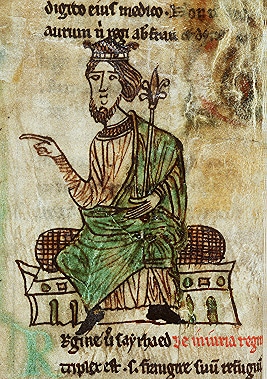 Howell the Good became King of the Britons and is commemorated as one of the most conscientious Welsh rulers in history. “Dda” was the word meaning good. This king is particularly know for the laws he introduced; the Laws of Hywel Dda.

Howell the Good was an extremely well educated man. He mastered English, Latin and Welsh. In 928 He went on a pilgrimage to Rome. He was the first Welsh prince to do so.

The Laws of Hywel Dda covered most parts of society and were greatly recognized for civilizing and protecting lives of people and animals.

Among other things, he improved the rights of women. As this page is about the history of cats, it is with great fascination we take a closer look at the laws concerning cats.

Howell the Good passed laws putting a price on the cats and making it a crime to steel cats. In his kingdom the following laws were out into practice defining the value of cats:

1.      The worth of a kitten from the night it is kittened until it has opened its eyes is a legal penny.

Furthermore if a cat failed to catch mice or if a female cat failed to produce new kittens, the owner was entitled to getting back one third of the money he had paid for the cat.

The following procedure was to be followed if a cat had been killed or stolen:

“The worth of a cat that is killed or stolen; its head is to be put downwards upon a clean even floor, with its tail lifted upwards, and thus suspended, whilst wheat is poured about it, until the tip of its tail be covered; and that is to be its worth; if the corn cannot be had, a milch sheep with her lamb and her wool, is of its value; if it be a cat which guards the king’s barn.”

It was also stated in the Laws of Howell the Good that three animals had the same worth: a filly (a filly is a young female horse usually under the age of four), a calf, and a cat.