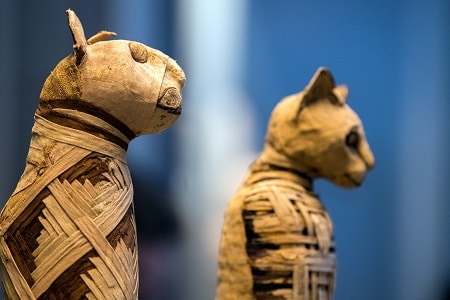 The goddess cat in Egyptian mythology is well known in the world of mythology.

Bastet was worshipped as the protector goddess of Lower Egypt and guardian of the pharaoh. Bastet was also defender of the chief male deity, Ra, a solar deity. Some referred to Bastet as “Lady of Flame” and “Eye of Ra”.

In ancient Egypt there was a death penalty for killing a cat. It did not natter if the cat was killed on purpose or if it was an accident.

When a cat died, the ancient Egyptians would show their grief by shaving off their eyebrows.

Dead cats were mummified. When Bastet’s temple was excavated more than 300,000 mummified cats were discovered.

Many hundred thousand mummified cats have been found also in other places in Egypt.

In the city of Bubastis there was a temple devoted to the sacred cat goddess Bastet. Today the place is called Tell Basta.

The name of Bubastis in Egyptian is normally transcribed Per-Bast. Bubastis is the Greek name of the Egyptian Per-Bastet.

PER means “house” and the second word is the name of the goddess Bast or Bastet. The phrase means “House of Bast”.

Tell Basta/Bubastis is located by the River Nile about 90 km north-east of Cairo. It is just outside of the Egyptian city Zagazig.

As many as 700 000 Egyptian pilgrims would make the journey to participate in the yearly festival of Bastet.

The festival of Bastet was the most dazzling of all in the Egyptian calendar as described by Herodotus (an ancient Greek historian, 5th century BC):

“Barges and river craft of every description, filled with men and women, floated leisurely down the Nile. The men played on pipes of lotus.

The women on cymbals and tambourines, and such as had no instruments accompanied the music with clapping of hands and dances, and other joyous gestures. Thus did they while on the river: but when they came to a town on its banks, the barges were made fast, and the pilgrims disembarked, and the women sang, playfully mocked the women of that town and threw their clothes over their head.

When they reached Bubastis, then held they a wondrously solemn feast: and more wine of the grape was drank in those days than in all the rest of the year.

Such was the manner of this festival: and, it is said, that as many as seven hundred thousand pilgrims have been known to celebrate the Feast of Bast at the same time.”

There is no doubt that Bastet is the most known cat goddess in the world of mythology. Most of us have heard about Bastet, but not every knows the cat as a god has an exceedingly older history.

Before the era of Bastet the male cat in Egypt represented the Sun god named Ra.

The female cat represented the mother goddess named Mut. The goddess Mut would much later become the cat goddess known as Bastet.

In the “Book of the dead” there are passages about the “Great Cat Ra”.  The British Museum in London has a preserved copy from approximately 1580 B.C.

This particular papyrus shows an image of a large cat with a knife in his right paw and his other paw on the head of a python.

Great Cat Ra is about to stab the enormous python in its head.

The python represented Apep, the enemy of the Sun god Ra.

In the background is the Egyptian tree of life, called the Persea tree.

The hieroglyph was translated by the English Egyptologist, Sir Ernest Budge (1857-1934). It goes like this:

“I am the cat who fought near the Persea Tree in Annu (better known as Heliopolis) on the night when the foes of Nebertcher were destroyed.

Who is the Cat?

This male Cat is Ra himself, and he was called “Mau” because of the speech of the god Sa, who said concerning him:

“He is like unto that which he has made; therefore did the name of Ra become Mau”.

Others, however, have said that the male Cat is the god Shu, who made over the possessions of Keb to Osiris.”

The beautiful goddess Freyja in Norse mythology  had a carriage drawn by two cats.

The goddess Freyja was the goddess of love, sorcery and death.

Nobody had better knowledge of sorcery than Freyja.

The goddess Freyja taught the chief god Odin the art of witchcraft and sorcery.

It seems evident that ever since the Viking times cats have been associated with magic and witchcraft.