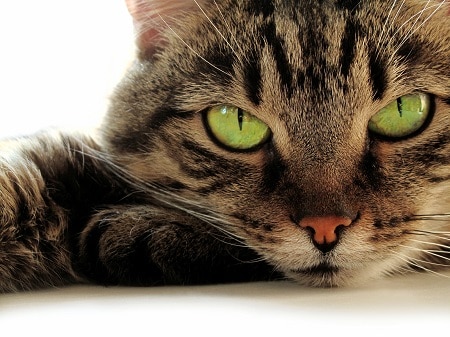 What is a Tabby Cat?

Tabby cats are found in a variety of different breeds. A tabby cat is not a cat breed on its own. The name implies the characteristic coat patterns of the cat.

The color of the cat does not determine whether it is a Tabby or not. The main factor is the pattern of the coat.

Tabby cats usually have a marking on their forehead that many people claim resembles the letter “M”.

There are several different coat patterns that are commonly classified to being tabby.

Mackerel – These have narrow stripes.

The mackerel tabby cats are naturally is named after the mackerel fish.

There is a clear resemblance in the pattern markings.

Blotched – Some people prefer to call these cats the “Classic Tabby” or the “Marbled Tabby”.  This pattern is the most common in Tabby cats. The color patches are arranged in large blotches.

Spotted – As the name implies these cats are have a spotted coat pattern. The spots may vary in size.

Ticked – These cats have quite tiny ticked markings on their coat.

The name “Tabby” is actually derived from the word “Atabi”. Atabi was a special kind of silk made in the Attabiah district of Baghdad. This silk was extremely popular in England.

The striped patterns on the silk were compared to those of the striped cats.

The M Marking on the forehead

Anyone who has seen a Tabby cat will have noticed the characteristic pattern of the letter M on the forehead. There are a couple different traditional stories about why the Tabby cat is marked with what resembles the letter M.

Not surprisingly the Christian and the Muslim communities have their own stories to tell commemorating their faith.

The Virgin Mary, Jesus and the Cat

This legend takes us back to the manger in Bethlehem shortly after the Virgin Mary had given birth to Jesus. Mary laid her newborn baby to rest in a manger. She was desperate to get some sleep in order to restore her strength.

Baby boy Jesus was not at all too pleased with his first crib. The hay in the manger was rough and irritated his tender skin.  The racked from the animals close by kept him awake.

The baby Jesus started crying as one would expect under the circumstances.

A stray cat happened to wonder by. The cat paused at the sound of the baby crying.  Instinctively the cat jumped into the manger and settled down next to Jesus. Jesus peacefully fell fast asleep snuggled up against the soft and warm cat.

In loving gratitude Mary stroked the forehead of the cat. As she did the cat received the mark of Mary.

The M would for all eternity be a reminder of Mary’s gratitude of the lovely act of kindness.

How this legend came about is uncertain. If we read the Bible we find that not once is there a reference to cats. Our beloved feline friend is totally absent in the Holy Scripture.

Prophet Muhammad and the Cat

It is told that the Prophet Muhammad loved cats.

There are five pillars (requirements) in Islam that every Muslim needs to respect.

Muhammad was sitting with his favorite cat. The cats name was Muezza. Muezza had fallen asleep on part of the robe that Muhammad was wearing.

As he sat there quietly he heard the call to prayer. Muhammad needed to go but did not want to wake up his cat. He took out his knife and very carefully cut off the sleeve of his robe.

The cat slept undisturbed and Muhammad attended the prayer meeting.

Legend has it that ever since that special incident the tabby cat has the mark of Muhammad on its forehead. 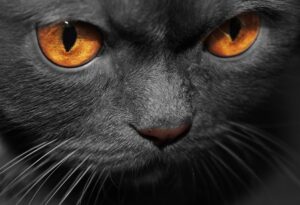 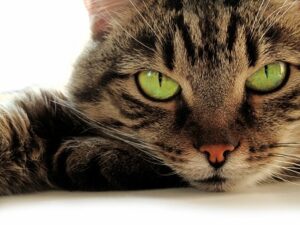 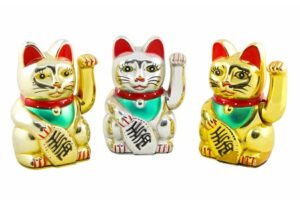 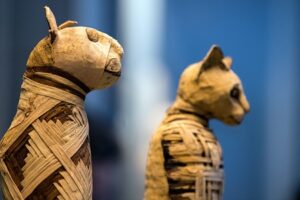