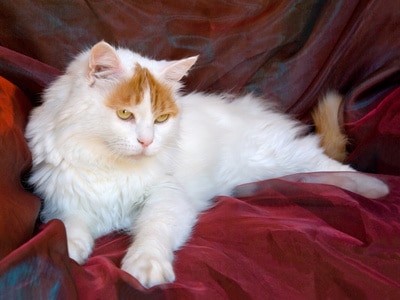 If you have believed that all cats hate water it is time you were introduced to the Turkish Van cat.

This cat actually loves water and it enjoys swimming as a leisure activity.

This cat is attracted to water.

That is something you need to take into consideration and make necessary the precautions if you have a swimming pool.

If you do have a swimming pool make sure it is super easy for your cat to get out of the pool.

The Turkish Van cats do not appreciated rough handling of any sort. They do enjoy playing, often games like fetch.

These cats are active and need space.

They also need some quiet time.

These are intelligent and affectionate cats, but they are not your typical lap cat.

The Turkish Van would not be your first choice if you have small children. These cats are best suited for adults. >

The Turkish Van has long and silky hair. The cat does not have an undercoat, making the grooming easier. They will need some combing to keep the hairs from tangling.

Turkish Van cats in the West are white except their tail and head which are auburn (reddish-brown) in color.

Their eyes can be either amber or blue or odd-eyed (one amber, one blue). The Turkish Van cats are normally very healthy cats.

The Turkish Van cat originates from Eastern Turkey near Lake Van. It is close to the Iranian border.

Interestingly the local people at Lake Van in Turkey consider the true Turkish Van cat to be completely white and preferably odd-eyed.

This is an ancient cat breed and these cats have been highly valued in Turkey for centuries.

Oddly they were late coming to the West.

The first two cats arrived in Great Britain in 1955.

Two British photographers named Laura Lushington and Sonia Halliday were given two of these cats as a gift when they visited the Lake Van region in Turkey on a photography mission for the Turkish Tourist Board.

They brought the cats back to Britain and absolutely feel in love with these very extraordinary cats. They revisited Turkey and a few more of these cats were sent to Britain. A breeding program started.

It would be another fourteen years before the Turkish Van was recognized as pedigree cats.

There was a lot of dispute about the name and the records of the ancestry. When they got that sorted out the cat breed was finally recognized in Britain in 1969.

The name Turkish Cat was agreed upon. Later the name was changed to the Turkish Van Cat to make a clearer distinction from the Turkish Angora cat.