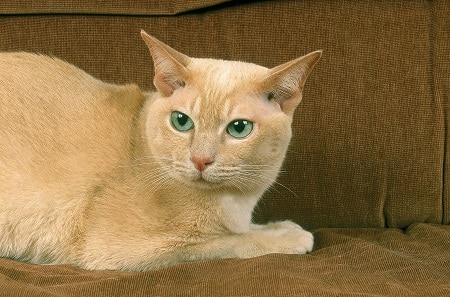 The Tonkinese cat is often just referred to as the “Tonk”.

The Tonkinese is a crossbreed between the Burmese cat and the Siamese cat.

They don’t require a lot of grooming. Combing them once a week will do fine.

They are very social cats. These cats are not as noisy as the Siamese cats, but they are vocal and love to chat.

The Tonkinese are active. They do need a lot of space to play.

These are highly intelligent cats.

The Tonkinese cat owners will be well advised to get plenty of cat toys.

If the Tonkinese does not have entertainment from cat toys,the cat is known to be mischievous.

They love to climb and jump to high places. This is a cat that will truly love to have a large cat gym or cat tower to play on.

These cats will not be happy being left alone. They do need to interact with people or other cats.

It certainly would be a great idea to get two Tonkinese instead of one.

The Tonkinese are very friendly and will do great as a family cat.

The breeding of these cats started in the 1950’s when American named Milan Greer set out to create what he called “The Golden Siamese” by crossing a Burmese male with the Siamese female.

He went on for five generations and considered the program to be very successful stating that he had created “a prodigy in fur”.

He did not pursue the breeding program any further and other breeders soon started their own programs.

In the 1960’s a Canadian cat breeder named Margaret Conroy was the first ever to register the Tonkinese with a cat club in 1965.  She worked extremely hard and did a fabulous job promoting the Tonkinese cats.

The club that has the honor of being the first to recognize the beautiful Tonkinese was the Canadian Cat Association.

This is the reason many consider the Tonkinese cats a Canadian cat breed.

There seems to be some confusion as to how the Tonkinese got their name. Some books report that the name was given to the cat breed by Edith Lux who decided to change the name from Golden Siamese to Tonkinese.

The cat was named after the Gulf of Tonkin which is close to Burma and Thailand (Siam) but does not belong to either one of the countries.

Others report that the name was not originally Tonkinese, but was given the name “Tonkanese” in Canada. Tonkanese was known as an island in the South Pacific were half-breeds were treated as equals.

Many do still call the cats Tonkanese , making this explanation plausible.  The spelling was only changed when the cats were registered in the United States.

When two Tonkinese are mated the female will have a litter consisting of different cat breeds, half of the litter are in that case Tonkinese.

This is the reason many were reluctant to accept the Tonkinese as a separate cat breed.

All North American societies do accept this cat breed today. The Tonkinese cat breed was accepted by the GCCF (Governing Council of the Cat Fancy) in Great Britain in 1991.