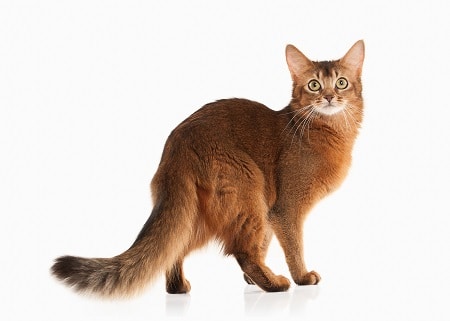 About the Somali Cat

The Somali cat is a long-haired version of the Abyssinian cat. These two cat breeds are very similar.

The Somali cat is often nicknamed “The Fox Cat”.

The reason for this is that the Somali cat has long and very bushy tail. In many ways there is a likeness to a fox as far as appearance goes.

The Somali cat comes in many different colors. The coat of the Somali is softer, longer and silkier than that of the Abyssinian cat.

The hairs also have more color-bands per hair.

These cats will benefit from grooming about two to three times a week.

The Somali is an Active Cat

The Somali cat is an extremely active cat. This cat loves to run and play.

Considering the high level of activity, this is not a cat you want to choose if you live in a small cramped apartment or if you are elderly.

These cats need lots of space.

For an active family the Somali cat certainly is great fun.

The Somali cat will enjoy the company of another equally active cat.

You may just think about getting two cats. The cats will be happier and you will have twice the fun.

The Somali is talkative. It does love to chat and has a very cute cat voice.

The cat does tend to be a little more reserved than the Abyssinian cat. Once the Somali has accepted you as a true friend, they are very affectionate.

This breed started as an “accident” breed. In the 1950’s a few long-haired Abyssinian kittens were born into a litter.

The Abyssinian is a short-haired breed. At first these long-haired Abyssinian cats were neutered and given away as pets.

Then some breeders started to show extra interest in this uniqueness.

Breeders from Australia, New Zealand and the United States loved this fabulous cat and with great enthusiasm started to breed these unusual long-haired Abyssinians.

Long-haired Abyssinians were exchanged and serious breeding programs were soon in progress to improve and establish these cats as a new and independent breed.

It was a cat breeder named Evelyn Mague from the United States who thought up a name for this special breed.

She suggested they be called “Somali Cats” because Somalia is a neighboring country to Ethiopia.

Abyssinia is the old name for Ethiopia. The Abyssinian has its name from Abyssinia.

A Somali belonging to Evelyn Mague named George is by many considered to be the founding father of the Somali cat breed in the United States.  George was born in 1967.

The Somali Cat Club was established in 1972. The Somali cat received championship status in 1978 in the United States.

In Britain the Somali cats were not well accepted at first. It was not before countries, like Australia, Canada, New Zealand and the United States) were raving about this cat breed that Britain decided it was time to give the Somali a second chance.

Finally in 1982 the Somali received the recognition they deserved in England.