The cute Singapura cat is the smallest cat of all pedigree cats.

The Singapura cat weighs between 4 and 9 pounds which is about 2 to 4 kilos.

Compared to the Maine Coon which has an average weight of 17 pounds, the Singapura is tiny indeed. 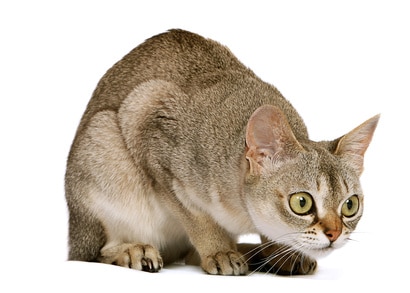 The Singapura cat is a short-haired cat with a silky coat.

It only comes in one color; Sepia Agouti which is a gold ivory with bands of dark bronze and cream ticking.

They have large eyes and ears. The nose is short and head is round-shaped.

The tip of the tail is black.

The Singapura is muscular and athletic. It has strong legs, but the feet are rather short.

The Singapura cat is a talkative cat. It loves conversation and has a soft and pleasant voice.

The Singapura is an active cat.

This cat loves to play. In fact this cat delights in playing well into old age. The Singapura tends to seek out high places.

Being so small it seems this cat takes pleasure in getting on high places where the cat can get an overview on what is going on in its kingdom.

If you are considering buying a Singapura, you may want to look into getting a cat gym or cat tower.

The Singapura cat hates cold weather. It also hates wet weather. Be sure your home doesn’t have too much cold draft with you live in a cold climate.

The Singapura is a healthy cat. 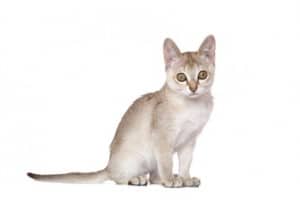 There is one warning though about the health of a Singapura. This concerns a pregnant Singapura.

As they are small some female Singapura cats will run into difficulties when giving birth.

All pregnant Singapura cats need to be carefully examined by a vet, as many of them may need a Caesarian operation.

These cats were in Singapore known as the “River Cats” and as the “Drain cats of Singapore”.

The reason being the cats (which no one at one time especially cared about and many prosecuted) took shelter in the city drains during the dry seasons.

During this time they were treated very badly by humans. Some called them the River Cats because stories were told that they originated from the banks of the river.

Today the situation has changed. The Singapura has become the National Cat of Singapore.

They have given the cat a new name; Kucinta, the Love Cat of Singapore.

The history of the Singapura cat as a cat breed has caused some debate and accusations. There are several stories being told about the Singapura.

The first one is that an American named Hal and Tommy Meadow found three of these cats while living in Singapore and started breeding.

These three original cats were named Tickle, Tessa and Pusse. In 1975 they moved back to the United States bringing along five Singapura cats including the first three they had gotten hold of.

They then set about to getting the Singapura accepted as a new pedigree cat.

This story caused serious debate a few years later and some started doubting if they were actually telling the truth.

Another breeder named Jerry Mayes had travelled to Singapore in search of new cats to breed.

During his visit he discovered the Meadow couple had imported their Singapura cats to Singapore from the United States, not the other way around.

During that time some began to speculate if the Singapura in reality was a cross breed between an Abyssinian cat and a Burmese cat.

The original story was then revised. They informed that that these cats indeed were pure cat breeds from Singapore, but they had not been at liberty to tell the whole truth at first.

The second version was that Hal Meadow had been on a secret mission to Singapore in 1971. It was during that time he found four beautiful cats and sent them to the United States.

In 1974 the couple moved to Singapore bringing with them a group of Singapura cats including three grandchildren of the original four.

These three cats were registered with the names Pusse, Tess and Ticle (a slight variation of the names given earlier).

In 1975 they moved back to the United States bringing with them five Singapura cats; Pusse, Tess, Ticle, Gladys and George. The couple assured that the Singapura was a pure breed.

This story was accepted by most people and the Singapura was formally recognized.

No matter what story one chooses to believe, one thing is certain: the Singapura cat is absolutely adorable.

They soon became popular and admired by many cat lovers across the United States.

In July 1988 the first Singapura cat arrived in Great Britain. It was a pregnant cat named Faye Raye.