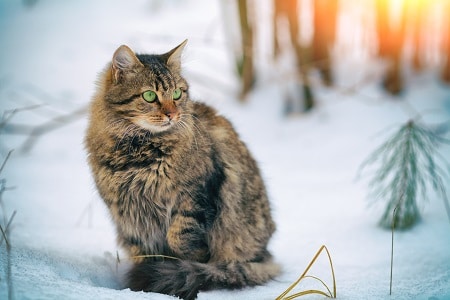 About the Siberian Cat Breed

The majestic and impressive Siberian cat is the National Cat of Russia. The Siberian is a large long-haired cat.

Actually this is the second largest cat breed. Only the Maine Coon is larger than the Siberian.

The Siberian is perfect for chilly winters.

It has a three layer coat which will protect the cat from the cold temperatures.

The Siberian comes in all colors.

It has a very bushy tail and in many respects the appearance of the Siberian bears a resemblance to of that of the Norwegian Forest cat.

The Siberian is a strong athletic cat.

This cat despite its size is known to be one of the best jumpers of the domestic cat world.

Cats of this breed are talkative. They do enjoy the company of other likeminded cats and two Siberians will do better than one living alone.

They are loyal cats and love to play fetch-games. Many say they have a somewhat dog-like manner.

This Cat is Hypoallergenic

The Siberian may be great news for anyone suffering from cat allergy.

There is a high probability that people with cat allergy will not react to this cat. The Siberian is considered a hypoallergenic cat.

Many believe it is the hairs of the cat that cause allergic reactions.  This is not true. What causes cat allergy is a protein known as FEL D1.

This protein is in the cat saliva, also in the skin glands and urine.  When a cat grooms itself the fur gets covered with saliva. When the saliva dies up, small particles are scattered into the air.

When a person with allergy tendencies, breathe in the air they will react. The FEL D1 protein is known to be sticky. Getting rid of carpets can be one way to reduce the amount of FEL D1.

We all are aware of the high level of frequency a cat grooms and with that knowledge you can understand how often FEL D1 is airborne.

People with allergies are advised to test their reaction to the cat before bringing it into the home.

The level of FEL D1 does vary and there is no guarantee that anyone with cat allergy will endure the Siberian cat. Mixed breeds will produce higher levels of FEL D1.

Another cat breed which is known to produce less FEL D1 is the Abyssinian cat.

The Siberian is an old natural cat breed of Northern Russia. It has been so common there that for years no one seemed to take special notice of this beautiful cat.

In Europe and the United States not very many people were familiar with this cat breed.

That all started to change when two Siberian cats found close to St. Petersburg were brought to Germany for breeding purposes. The two cats were named Tima (male) and Mussa (female).

In Russia they now started to take the Siberian seriously and treat it with the great respect it deserves.

A system for cat registry of the Siberian was put in place at the Kotofej Cat Club in St. Petersburg in 1987.

It is told that Russian President Dmitry Medvedev owned a Siberian named Dorofei, which got into such a fight with former Soviet president Mikhail Gorbachev’s cat next door that the story made it to the main stream news. You can read about the cat fight here.

In 1990 the Siberians cats came to the United States. They were first shown at the International Cat Show in New York in 1991.