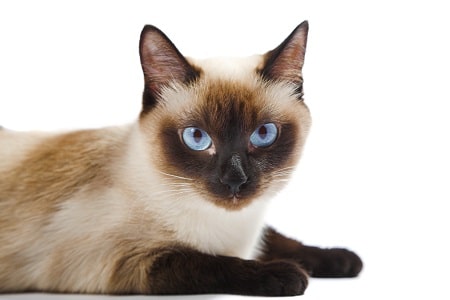 The Siamese cat is a cat of absolute royalty! This cat is one of the oldest cat breeds we have.

It has its name from Siam, the old name of Thailand.

Many will tell you that at one time the Siamese was considered a sacred cat.

Stories are told that only the monks, aristocrats and royalties were permitted to own this elegant and beautiful cat.

The Siamese cat was mentioned in the “Cat Book Poems” probably written in the 1500’ in Ayudhya, the old capital of Siam.

No one is completely sure exactly when it was written. In this book the Siamese cat was called Vichien Maat. Vichien Maat means “Moon Diamond”.

The Siamese cat has gorgeous blue eyes. It is a slender cat. This is an athletic cat with long legs.

The tail can be kinked. Breeders today do try to avoid the kinked tail.

This short-haired cat is easy to groom. The Siamese cats are healthy cats and have a lifespan of 15-20 years.

All Siamese kittens are born white. The color of the Siamese is connected to the body temperature.

The pigment will develop naturally on the body parts that are cooler, making the fur darker in these areas.

The parts of the body which are warmer will remain white or lighter because the pigment is unable to develop.

The color of the fur of a Siamese cat which for example suffers from fever will change to a slightly lighter color.

The Siamese cat is known to be very noisy. This truly is a vocal cat.

If you cannot stand loud meowing, please do not get a Siamese.

This is not a cat for someone who needs peace and quiet at all times.

The Siamese cats are extremely intelligent. They are loyal cats.

These cats tend to bond to a special person, they are somewhat a “one-person” cat.

They are highly protective and will defend their owner if they feel intimidated.

The Siamese cats are extroverts. They are action cats.

They love attention and love to play. It would be a great idea to get two cats, that way they will have a playmate if you should be busy.

The Siamese go back a long time. An article in the London Daily Telegraph portrayed the cat in 1879; “couple of juveniles of Siamese extraction, with black muzzles, ears, feet and tail setting off a close yellowish drab coat…”.

The cat was from David Stickles, the American Consul in Bangkok.

Unfortunately Siam died some months later in October 1879. She had fallen ill on her long journey to the White House which had started the previous year.

Siam was first shipped to Hong Kong, and then shipped to San Francisco and from there travelled by land to Washington D.C. Siam, the first Siamese cat in the White House did create quite a stir and people were absolutely amazed by this new exotic cat from Thailand.

The Siamese cat was to become very popular.

The first documented Siamese cats to arrive in Great Britain were the two cats, a male named Pho and a female named Mia in 1884.

Pho and Mia were a gift from Edward Blencowe Gould to his sister, Mrs. Lilian Velvey.

Edward Blencowe Gould was Acting Vice-Consul in Bangkok. Stories were passed around that he had gotten these cats directly from King Chulalongkorn (he ruled from 1868-1910).

He was offered to choose anything he wished from the palace as a farewell gift. He chose a couple of beautiful Siamese cats.

The King was shocked as these cats were sacred to the palace, but kept his word and let Edward Gould take the cats.  Many dismiss this story as a tall tale.

They won the “Best cat in the show” and “Best short-haired Cat”.

Mrs. Velvey then started to import more Siamese cats to Britain. This had become an easier task. Her brother had in the meantime started a cattery in Bangkok.

A debate started about the Siamese cats.

Many people argued that all the romantic stories about the Siamese cats being sacred Royalty cats were utter nonsense.

Even so the stories about the Royalty cats of Siam have been kept alive by cat lovers throughout the years.

In January 1901 the Siamese Cat Club was established in England.

In the United States Mrs. Clinton Locke from Chicago, also known as the “Mother of American Cat Fancy” formed the Beresford Cat Club in 1899.

The first two Siamese cats to be registered here were the male Siamese named Siam and the female named Sally.

Many British breed Siamese cats were sent to the U.S. and preferred by the wealthy. They were quite expensive.

In 1909 the Siamese Cat Society of America was formed.

Over the years the appearance of the Siamese cat has changed. Earlier it was not uncommon to see cross-eyed Siamese and Siamese cats with kinked tails.

This is no longer a preferred trait. The first Siamese cats had a rounder shaped face. Over the years breeders have produced a slimmer cat.

Today many Siamese cats have a more narrow-shaped head, are more slender and have longer legs and long slender tails.

The magnificent Siamese cats have their origin in Siam, which is the older name of what is now Thailand. There are legends about how the Siamese cat got a kinked tail and blue eyes.

Why the Siamese Cats have Blue Eyes

Once a temple where some Siamese cats resided was ambushed. The attackers drove the monks away and mistakenly thought they were free to rob the sacred alter from all its valuables.

As the raiders approached the sacred alter they discovered the cats sitting guard in front of it.

The cats threatened them with by showing their sharp teeth and claws.

The sight was enough to frighten the raiders and they fled the temple in a hurry empty handed.

When the monks returned to the temple they saw that the courageous cats now had blue eyes, the heavenly color.

These heroic cats would forever reflect through their eyes that they had defended the sacred alter and thus saved the heavenly treasures.

A pair of Siamese cats resided at a temple. Unfortunately the priest at the temple was no good. He was constantly drunk.

His job was to guard the sacred golden goblet once used by the Great Buddha. The priest did a poor job and had a tendency to disappear for days.

The cats could not stand the situation anymore. The priest had again disappeared and the cats decided to take action. The male cat left the temple in search of a new holy man.

The female cat stayed behind to guard the sacred goblet.

The female cat stared continuously at the goblet, taking her assignment quite seriously.

As a result her eyes got a permanent squint. After a while the female cat was exhausted.

She then took the goblet and rapped her tail around it to keep it safe as she fell asleep.

When the male cat returned with a new priest, they found the female cat still protecting the goblet with her tail.

To their amazement they also found she had given birth to five kittens.

All the five kittens had squinted eyes and a curve on their tail.