The folded ears on many Scottish Fold cats will catch your attention straight away.

The Scottish Fold cat is to say the least a cute cat.

These cats have a round broad face. Their eyes are large. They have short legs and a stocky body. 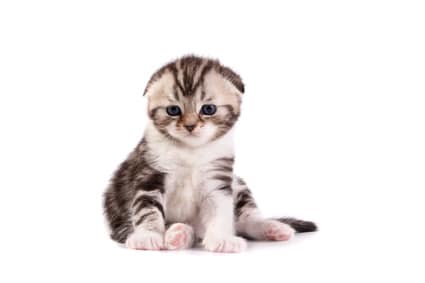 All Scottish Fold kittens are born with “normal-looking” ears.

After about 25 days you may see the shape of the ears change.

In other cats the cartilage starts to harden, making the ears stand upright.

This does not happen in the Scottish Fold cat breed. Their ears will simply fold forwards. The degree of the folding ears varies.

These cats are healthy cats with a lifespan of 12+ years.

There is one exception.

That is if two Scottish Fold cats with folded ears are mated.

In this case all the kittens will develop folded ears, but may also have serious defects and health issues, such as skeleton problems.

It is of vital importance that a cat with folded ears is only mated with a cat with normal ears. This will keep the kittens free from defects.

Not all the kittens will develop folded ears, making the ones with folded ears very special.

Some may claim that these cats have a hearing problem. This is far from the truth.

The hearing ability of the Scottish Fold is equal to that of any other cat.

Of course white cats with blue eyes are more inclined to be deaf; but that is the case of all white cats no matter what breed they are.

The Scottish Fold cats are very social, playful and loyal cats. They get along great with kids and other pets.

These cats are very loving, indeed. If the cat is left alone all day while the owners are off to work, it will get lonely.

These cats do need a playmate and it is recommended to get a second cat for that reason. 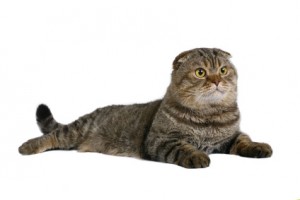 The first known Scottish Fold cat was discovered on a farm in Perthshire which is in the Tayside region in Scotland in 1961.

A shepherd named William Ross noticed a white female cat on a farm belonging to Mr. and Mrs. McRae.

The ears on this cat were folded in a strange way.

This white female cat with the folded ears was named Susie. William Ross asked the McRae couple if they knew the history of the cat, which they did not.

The male kitten was given to a neighbor. This cat was neutered.

The female kitten was given to the shepherd and his wife, William and Mary Ross. They named the cat Snooks.

Sadly three months later Susie was hit by a car and died. William and Mary Ross had a keen interest in pedigree cats and were absolutely fascinated about the prospect of a new cat breed.

They acquired a white British Shorthair cat which was mated with a son of Snooks. At first they called these cats with folded ears “Lop-eared”.

The Ross couple got help from a cat breeder with special interests in genetics. Her name was Pat Turner. She borrowed a male cat with folded ears named Snowdrift and started a breeding program.

Snowdrift became quite a celebrity appeared in the news and on television.  Snowdrift had 76 descendants in just three years, 42 of these descendants had folded ears.

Pat Turner suggested they change the name to “Scottish Fold”.

Not everyone was pleased to see this new cat breed. Many experts in England denounced this new cat breed as a deformity, resulting in the Governing Council of the Cat Fancy opposing to recognize the Scottish Fold.

An American cat breeder from Pennsylvania named Sally Wolfe took interest in this so adorable cat.