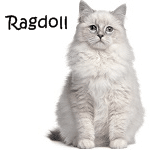 The Ragdoll cat is just so adorable. This cat is pure love.

The Ragdoll got its name because when you pick up the cat it will go limp and become completely relaxed. That is a special and unusual trait. 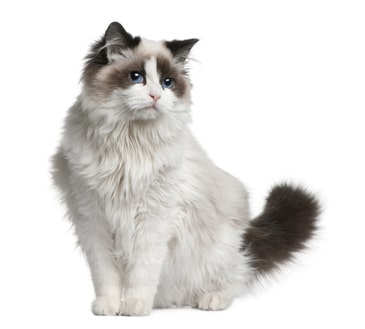 Ragdoll is a perfect name for this extremely affection and friendly cat.

The Ragdoll cat loves to be around people and will follow you around. This includes bathrooms and bedrooms.

This cat prefers to stay close to its owners.

They do love to play with you.

The Ragdoll cats are social cats and need your attention.

The Ragdoll can at times be quite mischievous, making your house a total mess, but as a cat lover all is forgiven when they gaze up at you with those beautiful eyes begging for love and affection.

They can also be curious cats believing anything on the floor is a toy.

Many of them enjoy chewing on whatever they find handy.

Most Ragdolls are known to be quiet cats compared with other cat breeds.

The Ragdoll is an indoor cat only. This cat is jovial and easygoing.

It is certainly is not street wise and will not be able to defend itself in dangerous situations.

Alone in the outside world the Ragdoll has a high probability of getting badly hurt.

The Ragdoll is a huge cat, very much larger than your average domestic cat.

The Ragdoll cat will be in need of cat grooming 2-3 times a week.

The appearance of the Ragdoll cat may bear a resemblance to the Birman in many ways.

The Ragdoll is a heavy cat. The face is rounded. They have beautiful blue eyes.

The Ragdoll cat was developed in the 1960’s, making this cat breed fairly new. Anne Baker is responsible for the Ragdoll.

A mating occurred between a white Persian/Angora female cat named Josephine and a male Birman. Two of Josephine’s kittens named Blackie and Daddy Warbucks, are said to have been the founding fathers of the Ragdoll.

Daddy Warbucks later was crossed with a daughter of Blackie. Two of the kittens from that litter are known to be the first Ragdoll cats. They were named Tiki and Kyoto.

There is a story that has been passed around for some time now about Josephine being involved in a road accident.

The injuries Josephine suffered after being hit by a car had broken her pelvis.

The tale goes on to say that after this accident all the kittens Josephine gave birth were born with the uncharacteristic limp and seemed somewhat immune to pain.

There is no evidence that the car accident has anything to do with the unusual behavior of the Ragdoll cats.

Ragdoll are in reality not immune to pain, they do need to be treated with tender loving care.

Another breeder named Denny Dayton and his wife Laura did tremendously important work to develop the Ragdoll as a recognized breed.

This couple was rewarded for their hard labor when they achieved the goal of getting championship status for the Ragdoll cat.

These four Ragdoll cats were some of the first to arrive in Britain. Their names were Prim, Proper, Lad and Lass.