Her coat is so warm, 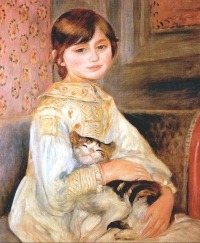 And if I don’t hurt her,

She’ll do me no harm.

So I’ll not pull her tail,

Nor drive her away,

But pussy and I,

I’ll sit by the fire

And give her some food

And Pussy will love me

Because I am good.

As I was going to St Ives

I met a man with seven wives

Each wife had seven sacks

Each sack had seven cats

Each cat had seven kits

How many were going to St Ives?

The Owl and the Pussy Cat – By Edward Lear 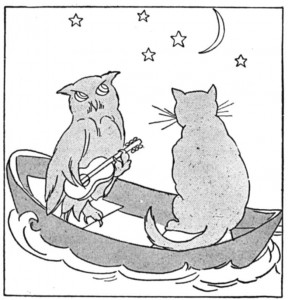 The Owl and the Pussy-Cat went to sea

In a beautiful pea-green boat,

They took some honey, and plenty of money

Wrapped up in a five-pound note.

The Owl looked up to the stars above,

And sang to a small guitar,

What a beautiful Pussy you are,

You are, You are!

What a beautiful Pussy you are!”

Pussy said to the Owl, “You elegant fowl!

How charmingly sweet you sing!

O let us be married! too long we have tarried:

But what shall we do for a ring?”

They sailed away for a year and a day,

To the land where the Bong-tree grows,

And there in a wood a Piggy-wig stood,

With a ring at the end of his nose,

His nose, His nose,

With a ring at the end of his nose.

“Dear Pig, are you willing to sell for one shilling 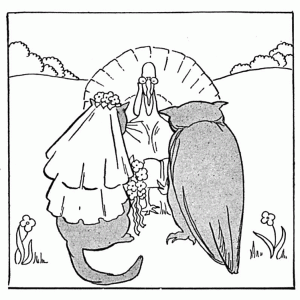 So they took it away, and were married next day

By the Turkey who lives on the hill.

They dined on mince, and slices of quince

Which they ate with a runcible spoon;

And hand in hand, on the edge of the sand,

They danced by the light of the moon,

The moon, The moon,

They danced by the light of the moon. 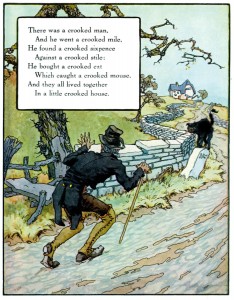 There was a crooked man,

And he walked a crooked mile,

He found a crooked sixpence

Against a crooked stile;

He bought a crooked cat,

Which caught a crooked mouse,

And they lived together

In a crooked house.

Pussy cat, pussy cat, where have you been?

I’ve been down to London to visit the Queen.

Pussy cat, pussy cat, what did you there?

I frightened a little mouse, under her chair. 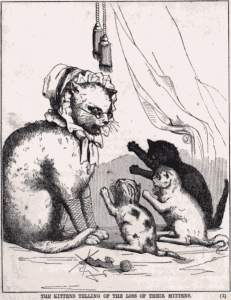 And they began to cry,

That we have lost our mittens.

What! Lost your mittens, you naughty kittens!

Then you shall have no pie.

You shall have no pie.

The three little kittens, they found their mittens,

And they began to cry,

Our mittens we have found.

Put on your mittens, you silly kittens,

And you shall have some pie.

Oh, let us have some pie.

The three little kittens, put on their mittens,

And soon ate up the pie;

That we have soiled our mittens.

What! Soiled your mittens, you naughty kittens!

Then they began to sigh,

They began to sigh.

The three little kittens, they washed their mittens,

And hung them out to dry;

Oh! mother dear, do you not hear

That we have washed our mittens?

What! Washed your mittens, then you’re such good kittens.

But I smell a rat close by

We smell a rat close by. 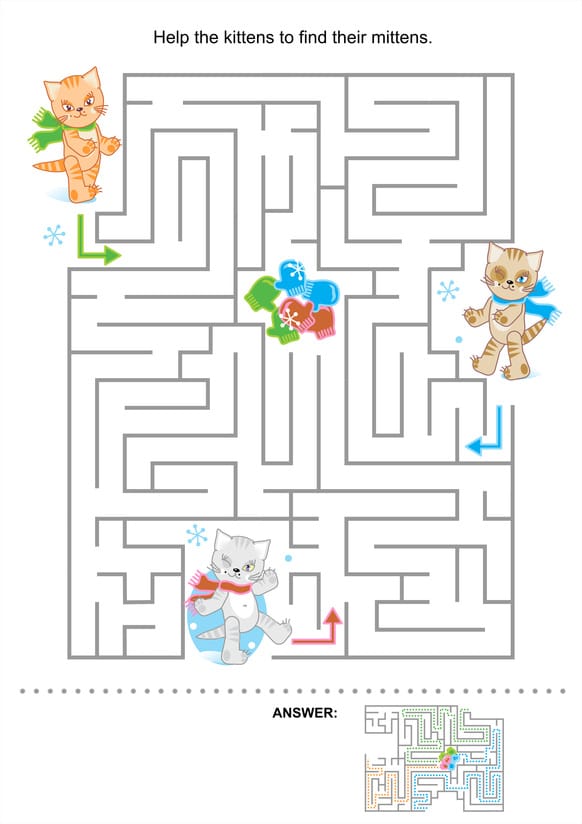 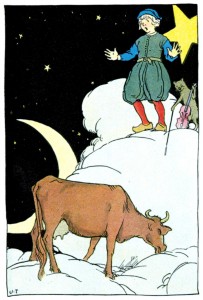 Hey diddle diddle, the cat and the fiddle,

The cow jumped over the moon.

The little dog laughed to see such sport

And the dish ran away with the spoon!

The Cat & Fiddle is a popular pub name. If your home town doesn’t have a Cat & Fiddle Pub, maybe it is something to think about.

In England there is a road between Buxton, Derbyshire and Macclesfield, Cheshire named “Cat and Fiddle Road”. The “Cat and Fiddle Inn” is the second highest inn in England (515 meters /1,690 ft above sea level).