The Manx cat is a very old cat breed.

The first thing that comes to mind when speaking of the Manx is that they have no tails.

The Manx cat is famous for being tailless. 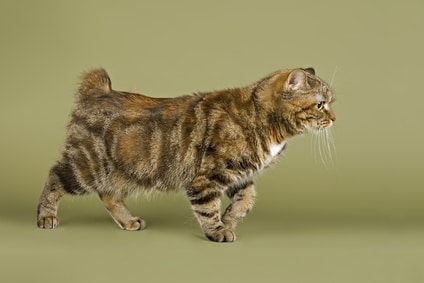 The Manx cat has longer hind legs than front legs. The head is round shaped.

The body is strong and muscular. It has a double coat and comes in all colors.

This cat does require grooming about twice a week.

Actually not all Manx cats are tailless.

There are four different categories of the Manx cat.

1.      The Rumpy – The Rumpy is completely tailless and thought to be the true Manx cat.

4.      The Longy – The Longy is a Manx cat with a close to full length tail.
The Manx cat originated on the Island of Man. This island is located in the Irish Sea between Scotland and Northern England.

These tailless cats have inhabited the island for several hundred years.

The Manx cat has become a quite popular emblem of the Island of man.

On the Island of Man there is the well-known cat sanctuary called the Mann Cat Sanctuary. 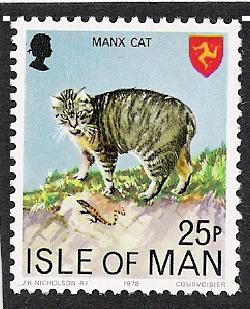 This is a safe haven for Manx cats as well as many other animals.

Any cat lover visiting the Isle of Man definitely should visit this fantastic place.

There are a few different legends telling the story about how these cats became tailless.

The Manx cat is a friendly and wonderful family pet.

It is a loyal and good natured cat.

This cat is very talkative and loves to communicate with its owners.

There are several different legends telling the story about how the Manx cat became tailless.

The cats were the last animal to board Noah’s Ark.

The two cats were preoccupied with hunting  mice and ignored Noah’s urgent call to board the ark.

When the rain started pouring down, the two cats finally realized it was high time to get on the Ark.

The poor cats managed to enter the ark just as Noah was slamming the doors shut.

Unfortunately their tails got stuck as the heavy doors were tightly shut. The cats were safe but tailless.

After the great flood all the animals on Noah’s Ark were seemingly safe.

The forty days together onboard the ark had not resulted in truce between the animals.

The dogs and cats were constantly getting on each other’s nerves.

At one time the cats and dogs got into a terrible clash.

During the fight the dogs bit off the tail of the cats.

The cats were so distressed they jumped out a window and stated swimming with the intention of getting as far away from the dogs as possible.

The cats swam all the way to the Isle of Man. They were finally safe and sound.

The tailless cats settled contentedly on the Isle of Man.

The horrible Vikings were responsible for making the cats tailless.

They plundered and stole the valuables of the island.

As that wasn’t enough, the Vikings cut off the tails of the beautiful cats.

They used the cat tails as ornaments on their helmets. The cats of the Isle of Man remained tailless.