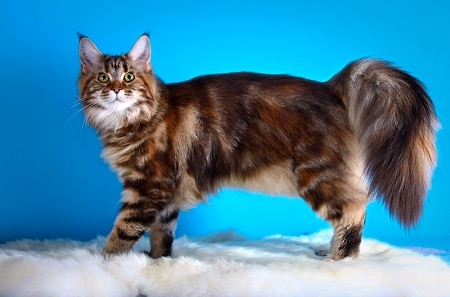 The Maine Coon is an enormous cat compared with other domestic cats.

In comparison the Maine Coon is normally twice the size of the average domestic cat.

They are lovable, friendly and loyal.

This makes the cat a wonderful family pet!

The Maine Coon has lately become one of the most popular cat breeds.

The Maine Coon is an old American cat breed.

It has lately become popular in many countries around the world.

This cat comes in many colors.

It is long haired or medium haired and are in need of some regular grooming.

The fur is quite thick, as it has three layers. This cat is naturally more adapted to cold climates.

The Maine Coons has a long fluffy, thick tails. They have large paws.

These cats get rather heavy with an average weight of 17 pounds.

The Maine Coon has the longest whiskers of all the cat breeds.

The whiskers of these awesome cats have been measured to 6.5 inches!

A characteristic sign of the Maine Coon is the “M” on the forehead.  It is easy to remember; an “M” for Maine Coon.

There are also several other legends as to why some cats have an “M” marked on their forehead. See Tabby Cat.

The Maine Coon is known to talk a lot with a really cute and charming chirping sound.

As the cats are so large in size, it is obvious that they need lots a space.

If they have the possibility to spend quality time outside, they will be quite content.

There are many theories and legends as to the history of the Maine Coon.

Nothing can be definitely proven.

One thing is for sure. It is not a cross between a raccoon and a domestic cat. That would simply be genetically impossible. Some tell a story connecting Marie Antoinette’s Angora cats to the Maine Coon. They say that Marie Antoinette was preparing to escape the country.

She shipped her six Angora cats to the U.S. She herself was caught and beheaded. Her cats left the ship when it arrived in Maine. The cats ran free and mated with the local cats.

They came as ships cats to Maine and mixed with the local cats.

Yet others tell a story of a ship captain named Coon. He traveled regularly to Maine. He always had lots of Persian cats and Angora cats on his ship.

When he went ashore some of them managed to escape and mated the local cats.

As early as in the 1860’s the Maine Coon cats were shown at the Skowhegan Fair competing for the title: Maine State Champion Coon Cat.

In the first cat show of North America in 1895 (at Madison Square Garden, New York) a female Maine Coon cat named Cosey received the high honor of the title “Best in Show”.

Sadly for the Maine Coon their awesome splendor was disregarded when the Persian and Siamese cats made their entrance.

The Maine Coon was almost forgotten for years.

Today the Maine Coon is one of the most popular cats in the world.

All Harry Potter fans will already know that the cat who played the role of Mrs. Norris in the movie was a Maine Coon.

The first country in Europe to have a Maine Coon was Austria in 1953. The Maine Coon did not come to the U.K. before 1983.