The Korat cat is an old natural breed from Thailand.”  It was known in Thailand as the “Si-Sawat.

The Korat has a heart-shaped head. It is a short-haired cat with beautiful silver-blue fur. 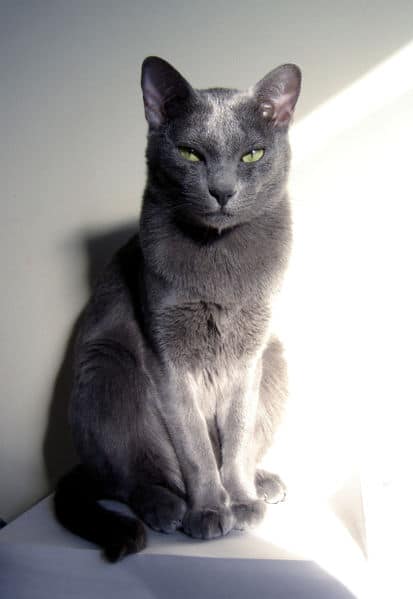 The cat does not have a full undercoat and therefore does not appreciate cold weather.

It is medium sized.

This is a playful and affectionate cat.

They do demand attention.

This is a loyal cat and it likes to talk.

The Korat can also be a great lap cat.

The Korat cat was considered good-luck in Thailand.

A newlywed bride was very happy if she received a pair of Korat cats as a wedding gift.

The Korat cats would indeed bring prosperity in the years to come.

The silver color of the coat represented the metal silver, naturally.

In earlier times this special cat breed would participate in a ceremony after a long dry season.

They would pour water over these cats to ensure the much longed for rain showers.

This cat has a long history. If you are ever in Bangkok, be sure to visit the Nation Museum.

On display in this museum is the “Cat Book Poems”. This is what was written about the Korat cat:

The Thai put a high value on the Korat cats. They were not for sale. The first cat was brought to England in 1896.

As these cats were rare, not many had heard about them. They were mistaken for scanty and poor variety of the Siamese cat.

Many years would pass before the Korat again was spoken about in England.

In 1959 the American Ambassador in Thailand received a two Korat cats as a gift.

The Korat cat was recognized as a pedigree cat in the U.S. in 1966.

These were the very first Korat cats to be born in Britain.