The Devon Rex cat has many nicknames: the Pixie Cat, the Alien Cat, the Elf Cat, the monkey in Cat Suit.

Like the Cornish Rex, the Devon Rex has mostly only down hairs. 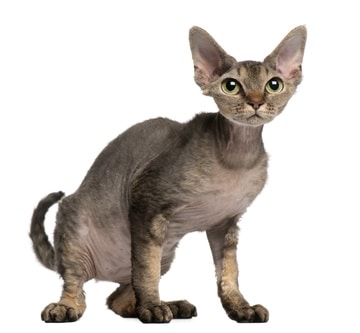 Cats normally have three layers of hair; the guard hairs, awe hairs and down hairs.

The down hairs are the undercoat of the cat fur.

The Devon Rex comes in all colors.

The genes of the Cornish Rex and that of the Devon Rex are two different types, making these cats definitely different breeds.

There have been attempts to cross the Cornish Rex with the Devon Rex, but that only resulted in straight hair kittens.

The Devon Rex cat has enormous ears and large eyes. The cat has a broad chest.

The head is wedge-shaped. The Devon Rex has short, curly cat whiskers.

The hind legs are longer than the front legs. This is a muscular and strong cat.

The Devon Rex cat is easy to groom. It is important to use a soft mitten when grooming. Also be careful that the whiskers are not hurt.

Their huge ears should also be kept clean. 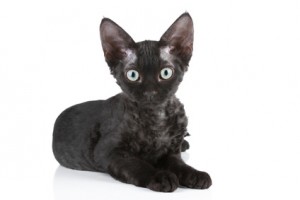 The Devon Rex does need a warm place to sleep. Be careful to keep the cat bed out of draft areas.

A heated cat bed is something the owner of a Devon Rex may consider.

The Devon Rex is a quite healthy cat. It certainly is an active cat.

This cat loves to jump! It will often try to get up to the highest place in the room.

This cat is known to be quite mischievous. It is a perfect cat for an active family. It interacts very well with its owners, but needs a lot of attention. The Devon Rex is tons of fun!

The Devon Rex has a huge appetite and needs more food than other cat breeds.

This cat has a tendency to wag its tail when it is happy. This is the reason some people have nicknamed the Devon Rex “the Poodle Cat”.

They are affectionate cats and do enjoy sitting on the shoulder of their owner.

The Devon Rex Cat got its name from the county of Devon, England; not far from Cornwall where the Cornish Rex was discovered.

It was a woman by the name of Beryl Cox who first found the Devon Rex. Close by her home there was an unused tin mine.

It was here in 1960, she started to pay attention to a stray cat with short curly hair.

This cat mated a stray female. The stray female gave birth to a litter of kittens in a field at the end of her yard.

One of the kittens had short curly hair, just like that of the father.

She took the male kitten home and named him Kirlee.