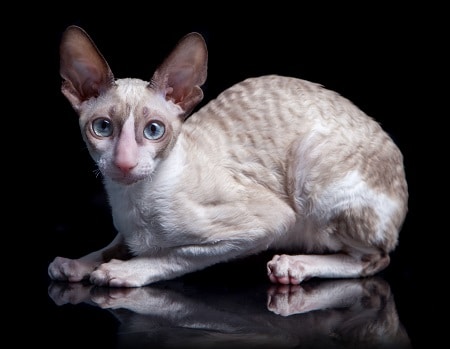 The Cornish Rex cat is a unique and exquisite cat that needs special care and attention.

The first thing that sets this cat apart from other cats is the fur. This cat has about half the thickness of the coat as other cats.

This fragile coat falls into curly waves which makes the cat quite distinctive.

The guard hairs and the awe hairs make up the upper-coat of the cat fur. The down hairs are the undercoat of the fur.

This cat does not have any guard hairs and most of its fur consists of down hairs.

You need to be very careful when grooming the Cornish Rex cat.

If the fur is brushed too hard, it may result in bold spots. Use a rubber brush and be careful not to scratch the skin.

This cat has long slender legs and a slim body with a long tail. The back is arched.

The ears are large and pointed.

The hind legs are longer than the front legs. They come in all colors.

The Cornish Rex will not take well to living in cold climates. This cat needs a warm stable climate.

The body temperature of the Cornish Rex is normally a little higher than other cats.

The Cornish Rex cat also has a larger appetite than other cat breeds.

The Cornish Rex is a “people cat”. It is a fantastic family pet. This cat will go to anybody, it is extremely social. The nearest lap is perfect.

The Cornish Rex loves to play. Be sure to have lots of cat toys.

It certainly is a fun cat to have in your home. The cat loves to play fetch. The cat is very clever and may soon figure out how to open doors. The Cornish Rex has tons of energy.

The Cornish Rex is a cat that loves to be cuddled and pampered. It simply adores your tender loving care. This cat is also quite vocal.

It also enjoys a warm place to rest. You need to make sure the cat bed is comfortable and placed somewhere where there is no draft. You may want to consider a heated cat bed.

The Cornish Rex is not an old breed of cats. It got the first part of its name from Cornwell in the United Kingdom.

It was on July 21, 1950 in a farmhouse that a cat named Serena gave birth to an unusual kitten with curly hair. The owner of the cats was Nina Ennismore.

The kitten was later mated back with its mother, who was a tortoiseshell. The very first male Cornish Rex was named Kallibunker.

Kallibunker is the founding father of the Cornish Rex breed.

The next litter of kittens had two curly coated kittens. One of male kittens was named Poldhu. Poldhu, in time fathered several more litters of this new breed of cats.

After she arrived in San Diego, she gave birth to four Cornish Rex kittens. Lamorna Cove became the queen cat of the Cornish Rex cats in the United States.