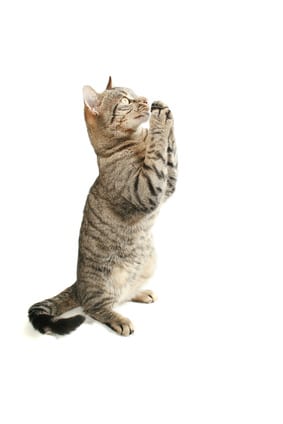 We are all aware that the cats in the religion practiced in Ancient Egypt were worshipped as a feline goddess.

As this religion no longer as any followers (except for feline species) it has settled into the world of mythology.

The church is known to have treated cats appallingly.

Cats were associated with the evil powers and brutally killed or burned alive with thousands of innocent women who were falsely accused of witchcraft.

Interesting enough there is no reference of any cats in the Bible.

“1. As Jesus passed through a certain village he saw a crowd of idlers of the baser sort, and they were tormenting a cat which they had found and shamefully treating it. And Jesus commanded them to desist and began to reason with them, but they would have none of his words, and reviled him.

2. Then he made a whip of knotted cords and drove them away, saying; this earth which my Father-Mother made for joy and gladness, ye have made into the lowest hell with your deeds of violence and cruelty; and they fled before his face. “

The Gospel of the Holy Twelve – Lection 24

“ 7. AND as Jesus entered into a certain village he saw a young cat which had none to care for her, and she was hungry and cried unto him, and he took her up, and put her inside his garment, and she lay in his bosom.

8. And when he came into the village he set food and drink before the cat, and she ate and drank, and showed thanks unto him. And he gave her unto one of his disciples, who was a widow, whose name was Lorenza, and she took care of her.

9. And some of the people said, This man careth for all creatures, are they his brothers and sisters that he should love them? And he said unto them, “Verily these are your fellow creatures of the great Household of God, yea, they are your brethren and sisters, having the same breath of life in the Eternal.”

The Gospel of the Holy Twelve, Lection 34

Did you know that cats have their own patron saint? They do. Saint Gertrude of Nivelles is the patron saint of cats.

Saint Gertrude was abbess of the Benedictine monastery of Nivelles, in what is today in Belgium. She lived from 626 – 659. Her feast day is March 17.

Monastery of Saint Nicolas of the Cats

In Cyprus, near Limassol there is a convent with the official name “Monastery of Saint Nicolas of the Cats”.

It is told that St. Helena of Constantinople (ca. 246 – 18 August 330) brought cats to the monastery in the 4th century in order to reduce the snake population.

To this day the nuns continue to care for the many cats residing at the monastery.