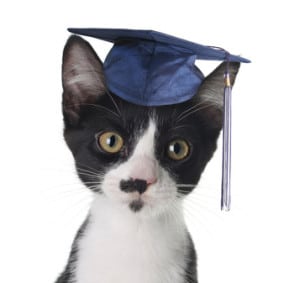 “Any normal, ordinary cat can keep any human in a state of frustration.” Gladys Tabor

“I’ve met many thinkers and many cats, but the wisdom of cats is infinitely superior.” Hippolyte Taine

“She sits composedly sentinel, with paws tucked under her, a good part of her days at present, by some ridiculous little hole, the possible entry of a mouse.” Henry David Thoreau

“What sort of philosophers are we who know absolutely nothing about the origin and destiny of cats?” Henry David Thoreau

“Another cat?  Perhaps. For love there is also a season; its seeds must be resown. Bur a family cat is not replaceable like a wornout coat or set of tires. Each new kitten becomes its own cat, and none is repeated. I am four cats old, measuring out my life in friends that have succeeded but not replaced one another.” Irving Townsend</span

“Unlike us, cats never outgrow their delight in cat capacities, nor do they settle finally for limitations. Cats, I think, live out their lives fulfilling their expectations.” Irving Townsend

“Of all God’s creatures there is only one that cannot be made the slave of the lash. That one is the cat.” Mark Twain 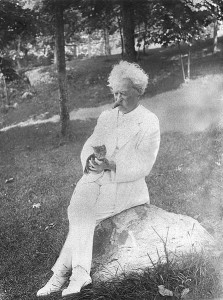 “One of the striking differences between a cat and a lie is that a cat has only nine lives.” Mark Twain

“A home without a cat, and a well-fed, well-petted and properly revered cat, may be a perfect home, perhaps, but how can it earn its title?” Mark Twain

“If man could be crossed with a cat, it would improve man but deteriorate the cat.” Mark Twain

“A cat is more intelligent than people believe, and can be taught any crime.” Mark Twain

V
“Cats are smarter than dogs. You can’t get eight cats to pull a sled through the snow.” Jeff Valdez

“Catnip is vodka and whisky to most cats.” Carl Van Vechten 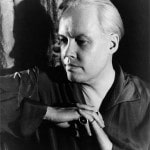 “Cleanliness in the cat is usually a virtue put above godliness.” Carl Van Vechten

“There is, indeed, no single quality of the cat that man could not emulate to his advantage.” Carl Van Vechten

“If men and women would become more feline, indeed, I think it would prove the salvation of the human race.” Carl Van Vechten

”Even the smallest feline is a work of art.” Leonardo da Vinci

“A mouse in the paws is worth two in the pantry.” Louis Wain

“Rarely do you see a cat discomfited. They have no conscience, and they never regret.” B. Webster

“Did St. Francis really preach to the birds? Whatever for? If he really likes the birds he would have done better to preach to the cat.” Rebecca West

“A cat is a snake in furs.” Edith Wharton

“The phrase “domestic cat” is an oxymoron.” George Will

“Cats find malicious amusement in doing what they are not wanted to do, and that with an affection of innocence that materially aggravates their deliberate offense.” Helen Winslow, author

(The Gutenberg Project has a delightful free book:  Concerning Cats: My Own and Some Others by Helen M. Winslow)

“The trouble with cats is that they’ve got no tact.” P.G. Wodehouse, English humorist and writer

The real objection to the great majority of cats is their insufferable air of superiority.” P.G. Wodehouse

X – Y – Z
“It doesn’t matter if the cat is black, or white, as long as it catches mice.” Deng Xiaoping