“I have a catholic taste in cats, in the sense that almost anything feline one four legs goes straight to my 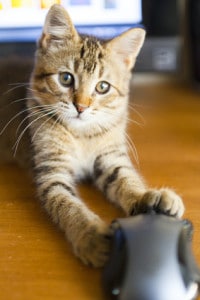 “Most of us rather like our cats to have a streak of wickedness. I should not feel quite easy in the company of any cat that walked about the house with a saintly expression.” Beverley Nichols

“Anyone, but anybody, any lout, any half-wit, any scruffy, self-centered moron, can command the affection and the servile obedience of a dog, but it takes intelligence and understanding – sometimes I think a certain psychic rapport – to win the affection of a cat.” Beverley Nichols

“A cat is a puzzle for which there is no solution.” Hazel Nicholson

“Always the cat remains a little beyond the limits we try to set for him in our folly.” André Norton

“Perhaps it is because cats do not live by human patterns, do not fit themselves into prescribes behavior, that they are so united to creative people.” André Norton

“My theory is that the writer senses a deep and profound kinship with the cat.” Joyce Carol Oates

“Never wear anything that panics the cat.” P.J. O’Rourke

“The cat lets Man support her. But unlike the dog, she is no hand licker. Furthermore, unlike Man’s other great good friend, the horse, the cat is no sweating serf of Man, The only labor she condescends to preform is to catch mice and rats, and that’s fun.” Vance Packard

“You can’t look at a sleeping cat and be tense.” Jane Pauley

“Cats refuse to take the blame for anything – including their own sins.” Elizabeth Peters

“If cats could talk, they wouldn’t.” Nan Porter

“The problem with cats is that they get the exact same look on their face whether they see a moth or an ax-murderer.” Paula Poundstone
R

“The more you rub a cat on the rump, the higher she sets her tail.” John Ray, English naturalist

“Cats, even when robust, have scant liking for the boisterous society of children, and are apt to exert their utmost ingenuity to escape it.” Agnes Repplier, American writer

“It is impossible for a lover of cats to banish these alert, gentle, and discriminating friends, who give us just enough of their regard and complaisance to make us hunger for more.” Agnes Repplier

“A kitten is chiefly remarkable for rushing about like mad at nothing whatever, and generally stopping before it gets there.” Agnes Repplier

“I would never wound a cat’s feelings, no matter how downright aggressive I might be to humans.” A.L. Rowse

“He seems the incarnation of everything soft and silky and velvety, without a sharp edge in his composition, a dreamer whose philosophy is sleep and let sleep.” Saki

“The little furry buggers are just deep wells you throw all your emotions into.” Bruce Schimmel

“Because of our willingness to accept cats as superhuman creatures, they are the ideal animals with which to work creatively.” Roni Schotter

“A sleeping cat is ever alert.” Fred Schwab

“There are two means of refuge from the misery of life – music and cats.” Albert Schweitzer

“Cats are a mysterious kind of folk. There is more passing in their minds than we are aware of. It comes no doubt from them being too familiar with warlocks and witches.” Sir Walter Scott

“I have found my love of cats most helpful in understanding women.” John Simon

“A charm of cats is that they seem to live in a world of their own, just as much as if were a dimension of space.” Harriet Prescott Spofford

“Since each of us is blessed with only one life, why not live it with a cat?”  Robert Stearns

“When it comes to the advantages of cats versus dogs as pets, there is no competition. Try going away for a weekend, leaving your German shepherd alone with a bowl of dry food, some water, and a litter box.” Robert Stearns

“If only cats grew into kittens.” R. Stern

“To escort a cat on leash is against the nature of the cat.” Adlai Stevenson