“My cat is an elegant eater of garbage, meat and cream.” John Inglis Hall 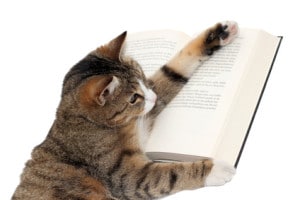 “If animals could speak, the dog would be a blundering, outspoken, honest fellow – but the cat would have the rare grace of never saying a word too much.” Philip Gilbert Hamerton

“Never try to out stubborn a cat.” Robert A. Heinlein

“A cat has absolute emotional honesty: human beings, for one reason or another, may hide their feelings, but a cat does not.” Ernest Hemingway

“One cat just leads to another.” Ernest Hemingway

“Cats, like women, should be respected as individuals rather than admired as decoration, but there’s no harm, given the choice, in taking up with a strikingly attractive specimen of either.” Barbara Holland

“I have noticed that what cats most appreciate in a human being is not the ability to produce food which they take for granted – but his or her entertainment value.” Geoffrey Household

“Cats at fireside live luxuriously and are the picture of comfort.” Leigh Hunt

“If you want to be a psychological novelist and write about human beings, the best thing you can do is keep a pair of cats.” Aldous Huxley, English author

“The tail in cats is the principal organ of emotional expression.” Aldous Huxley

“A cat can be trusted to purr when she is pleased, which is more than can be said for human beings.” William Inge, American novelist

“Cats and monkeys, monkeys and cats – all human life is there.” Henry James

“A cat’s got her own opinion of human beings. She doesn’t say much, but you can tell enough to make you anxious not to hear the whole of it.” Jerome K. Jerome

“My cat has taken to mulled port and rum punch. Poor old dear! He is all the better for it.” Jerome K. Jerome

“Cats are intended to teach us that not everything in nature has a function.” Garrison Keillor, American author

“Meow is like aloha – it can mean anything.” Hank Ketchum, American cartoonist

“Cats are rather delicate creatures and they are subject to a good many different ailments, but I have never heard of one who suffered from insomnia.” Joseph Wood Krutch, American author

“Cats seem to go on the principle that it never does any harm to ask for what you want.” Joseph Wood Krutch

“We quickly discovered that two kittens were much more fun than one.” Allan Lacy

“It is easier to hold quicksilver between your fingers and thumb as to keep a cat who means to escape.” Andrew Lang

“A child is a person who can’t understand why someone would give away a perfectly good kitten.” Doug Larson

“The cat could very well be man’s best friend but would never stoop to admitting it.” Doug Larson

“No matter how much cats fight, there always seems to be plenty of kittens.” Abraham Lincoln

“The best exercise for a cat is another cat.” Jo and Paul Loeb, American authors

“The cat is not really a domestic animal, and his chief charm lies in the fact that he still walks by himself.” Konrad Lorenz

“The cat is cryptic, and close to strange things which men cannot see.” H.P. Lovecraft

“Every cat is really the most beautiful woman in the room.” E. V. Lucas