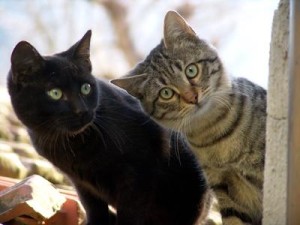 Find your favorite quote about cats!

“A cat is there when you call her, if she doesn’t have something better to do.” Bill Adler

“Two cats can live as cheaply as one, and their owner has twice as much fun.”  Lloyd Alexander, American author

“It is useless to punish a cat. They have no conception of human discipline; if they do, the idea is unattractive to them.” Lloyd Alexander

“Cats are only human, they have their faults.” Kingsley Amis, English poet

“To anyone who has ever been owned by a cat, it will come as no surprise that there are all sorts of things about your cat you will never, as long as you live, forget. Not the least of these is the first sight of him or her.” Cleveland Amory

“Passion for place – there is no greater urge in feline nature.” Paul Annixter

“Cats can be very funny, and have the oddest ways of showing they’re glad to see you. Rudimace always peed in our shoes.” W.H. Auden, poet

“I cannot exist without a cat.” Peggy Bacon

“Most beds sleep up to six cats. Ten cats without the owner.” Stephen Baker

“Kittens are born with their eyes shut. They open them in about six days, take a look around, then close them again for the better part of their natural lives.” Stephen Baker

“To bathe a cat takes brute force, perseverance, courage of conviction – and a cat. The last ingredient is usually hardest to come by.” Stephen Baker

“A resent census taken among the cats shows that approximately one hundred percent are neurotic. That estimate is probably on the low side.” Stephen Baker

“Like those great sphinxes lounging through eternity in noble attitudes upon the desert sand, they gaze incuriously at nothing, calm and wise.” Charles Baudelaire, French poet

“It is easy to understand why the rabble dislikes cats. A cat is beautiful; it suggests ideas of luxury, cleanliness, and voluptuous pleasures.” Charles Baudelaire

“You are my cat and I am your human.” Hilaire Belloc, Anglo-French writer

“The cat is, above all things, a dramatist.” Margaret Benson

“He lives in the half-lights in secret places, free and alone – this mysterious little-great being whom his mistress calls “My Cat”.” Margaret Benson

“A plate is distasteful to a cat, a newspaper still worse; they like to eat sticky pieces of meat sitting on a cushioned chair or a nice Persian rug.” Margaret Benson

“As every cat owner knows, nobody owns a cat.” Ellen Perry Berkeley, writer

“If a cat spoke, it would say things like, “Hey, I don’t see the problem here.” Roy Blount Jr.

“Dogs come when they are called. Cats take a message and get back to you.” Mary Bly

“I’m used to dogs. When you leave them in the morning they stick their nose in the door crack and stand there like a portrait until you turn the key eight hours later. A cat would never put up with that kind of rejection. When you returned, she’d stalk you until you dozed off and then suck the air out of your body.” Erma Bombeck, American writer

“To understand a cat, you must realize that he has his own gifts, his own viewpoint, even his own morality.” Lillian Jackson Braun

“The most domesticated of cats somehow contrives to lead an outside life of its own.” Katherine Briggs

“I can say with sincerity that I like cats. A cat is an animal which has more human feeling than most other.” Emily Brontë

“A dog, I have always said, is prose; a cat is a poem.” Jean Burden, American poet

“Prowling his own quiet backyard or asleep by the fire, he is still only a whisker away from the wilds.” Jean Burden

“The cat does not offer services. The cat offers itself. Of course he wants care and shelter. You don’t buy love for nothing. Like all pure creatures, cats are practical.” William S. Burroughs, American author

“They say the test of literary power is whether a man can write an inscription. I say, “Can he name a kitten?” Samuel Butler</s

“If we treated everyone we meet with the same affection we bestow upon our favorite cat, they too would purr.” Martin Buxbaum, author