Orangey – Orangey was the red tabby cat that stared in the movie “Breakfast Tiffany’s”. In the movie Orangey played the role of “Cat”. See Working Cats

Patripatan – Name of the white cat that went to heaven to pick a flower for its owner.

Patsy – Patsy was a black cat owned by Charles Lindbergh, the airplane pilot famous for making the solo non-stop flight across the Atlantic Ocean in 1927.

Prim – Name of one of the first four Ragdoll cats to arrive in the U.K.

Proper – Name of one of the first four Ragdoll cats to arrive in the U.K.

Prune – The name of the hairless cat used to breed the Sphynx Cat.

His cat loved to walk across the keyboard. Scarlatti composed the popular sonata Fugue in G minor, Kk. 30 after listening to the sounds of Pulcinella crossing the keyboard of his harpsichord. It later gained the nickname “The Cat’s Fugue”.

Punky – Punky was the name of one of the cats belonging to Doris Day.

Pyewacket – The name of the Siamese movie star cat in the movie “Bell, Book and Candle”.
S
Saeng Duan – name of one of the first Korat cats to arrive in Britain. Saeng Duan was a female Korat cat.

Sam – name of the male Korat cat which was one of the first to arrive in Britain.

Sara – Sara was the name of a cat belonging to Ronald Reagan.

Sinh – Sinh was the name of the “Sacred Cat of Burma”. 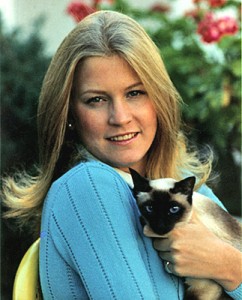 Shulamith – Name of one of the first American Curl Cats

Siam – Siam was the name of the first Siamese cat to arrive in the United States in 1879. Siam was a gift to Lucy Webb Hayes, wife of President Rutherford Hayes from the American Consul in Bangkok.

Sizi – Sizi was Albert Sweitzer’s cat. He was a French Missionary in Africa and Nobel Peace Prize winner.

Slippers – Cat belonging to Theodore Roosevelt (President of the USA). Slippers was a gray tabby cat with six-toed feet.

Solomon – Solomon was a movie star cat. Solomon played in “Diamonds are forever” and “Clockwork Orange”.

Snowdrift – Name of a Founding father cat of the Scottish Fold cat breed.

Snowdrop – Snowdrop was the name of the white kitten in “Through the looking glass” by Carroll Lewis. Dinah was the mother of the two kittens and was Alice’s pet cat. The other kitten was named Kitty and was black.

Sprite – Name of cat belonging to Bill Watterson, creator of Calvin and Hobbes

Susie – This white female cat with the folded ears found on a farm in Scotland.

Sybil – Sybil was a black and white cat living at 11 and 10 Downing Street. The cat was named after Sybil Fawlty from the TV show Fawlty Towers. Sybil was Chief Mouser to the Cabinet Office.