Jess – Jess is the black and white cat from the children’s series “Postman Pat” produced by BBC.
Jock – One of Winston Churchill’s cats. The cat named Jock was mentioned in Churchill’s will and was secured guaranteed permanent residents in his country home.

Kirlee – name of the founding father of the Devon Rex cat breed.

Kallibunker – name of the founding father cat of the Cornish Rex cat breed.

KinKin – the name of the first Bengal cat.

Lad – name of one of the first four Ragdoll cats to arrive in the U.K.

Lass – Name of one of the first four Ragdoll cats to arrive in the U.K.

Lamorna Cove – name of the first female Cornish Rex cat sent to the United States in 1957.

Madame Butterfly – Name of one of the first Japanese Bobtail cats to arrive in the United States.

Marvis – Name of the male Turkish Angora cat to come to the United States in 1966.

Micetto – Micetto was the name of the cat belonging to Pope Leo XII (1760-1829). Micetto was a large black-striped grayish red cat. The Pope adored Micetto.

Mike – Mike was the name of the famous cat at the British Museum in London. Mike (February 1909 – January 1929) guarded the gates of the British Museum. Time Magazine published two articles to him on his death. 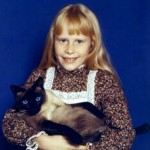 Monsieur Tibault – The name of the cat in “King of Cats” by Stephen Vincent Benét. Monsieur Tibault conducts an orchestra facing the audience and using his tail as the baton.

Moppet – The name of the cat in “The story of Miss Moppet” by Beatrix Potter.

Morris – Morris was the cat that went from “rags to riches”. See Working Cats

Mozart – Mozart the name of one of Martha Stewart’s cats.

Mrs. Norris – name of the cat (a Maine Coon) in the Harry Potter movie.

Mussa – name of the female Siberian cat sent to Germany for breeding.

Nelson – Winston Churchill (Prime Minister of Great Britain) loved cats. He had a black cat named Nelson. He adored the cat, Nelson. Nelson slept in his bed. Churchill also always kept a special chair next to his own for Nelson at the dinner table and at the Cabinet Room.

Nora– Nora is the name of the gray tabby cat rescued from a shelter New Jersey. Nora became famous for “tapping” the piano. A CD of music with one song incorporating Nora’s piano playing has been released by the Laurel Canyon Animal Company.