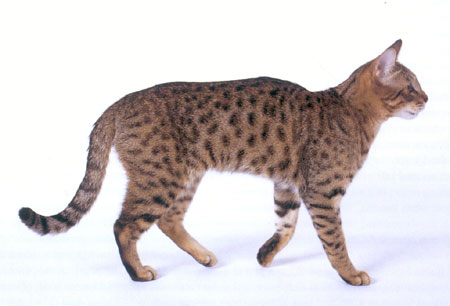 The California Spangled cat certainly resembles a miniature leopard. The association with the leopard is a result of a carefully planned breeding program.

The man responsible is screen-writer Paul Casey. The California Spangled cat is a result of the crossing of many different breeds, among them were an Abyssinian, a spotted Manx, a Siamese and a street cat from Cairo, Egypt.

It took eleven generations of the cat breeding program to give him the specific type of cat he wanted.

The California Spangled is a short-haired cat. It is medium in size and has a muscular body.  The cat weighs about 4 – 8 kg (8 -16 pounds) and is surprisingly heavy in comparison to its weight.

It moves with a low-slung walk. It does seem as the cat is constantly on a hunt. The round black spots on the fur do resemble those of a leopard or an ocelot.

The tail always has a black tip.

It seems to need to have an overview of what is going on in a room and therefore enjoys sitting on higher places. This cat will indeed enjoy a large cat gym.

The California Spangled cat enjoys playing and is told to be good tempered. All in all this is a healthy cat breed with no special health problems.

The Designer Cat for the Rich

The California Spangled cat has often been referred to as “the designer cat for the rich”. It does have a different history than that of other cat breeds.
Normally a new cat breed is introduced at a major cat shows.

This was not the case with the California Spangled. This new cat breed was introduced to the public a mail-order catalog.

The Christmas catalog from the Nieman Marcus Department store contained a surprising and very unusual offer in 1986. Customers could order a kitten of this new breed for $1,400.

Even more shocking was the fact the advertisement stated they could order a California Spangled kitten in a color that matched the colors in their home.

Selling kittens in a mail-order catalog certainly got the attention of the public. Many encouraged people to boycott the Nieman Marcus Department store stating it was unethical to sell living animals in that manner.

Even though lots of people protested against the practice, the orders for the kittens kept coming and the waiting list to purchase the American Spangled grew to several hundred orders.

The California Spangled Association was formed with Paul Casey as its president. The new breed has also been recognized the TICA and the ACA.

Maybe by creating a domestic cat which resembled the leopard he could make certain people rethink before purchasing merchandise made from large wild cats as the leopard and the ocelot.