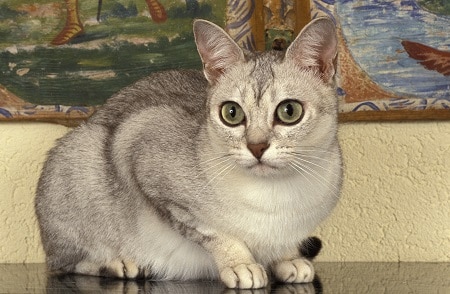 The Burmilla cat is pure love. This is an exceptionally gentle and kind cat. The Burmilla is a relatively new breed from the United Kingdom.

The story of how the Burmilla came is actually quite romantic.

It all started with Baroness Miranda von Kirchberg in 1981.

These two cats where waiting to be mated with one of their own breeds.

It was obvious that these two cats enjoyed each other’s company.

Baroness Miranda saw no other solution than to isolate the two pedigree cats.

Fabergé was shortly to be sent away to mate with another Burmese cat.

One fine day a lady, who was employed as a cleaner, somehow forgot to close the door to Fabergés room.

Sanquist naturally took the opportunity to visit his dear Fabergé.  As it turned out this encounter was ever so passionate!

Fabergé was then sent away to be mated. They did not know she was already pregnant.

When she returned she gave birth to four beautiful female kittens. It became quite apparent who the real father was.

Sanquist turned out to be a wonderful father. He stood by his new family.

His fatherly instincts were touching as he helped groom and protect the kittens.

She decided she wanted to breed these cats.

They were crossed back to Burmese cats. The results were encouraging.

Another breeder named Theresa Clarke received the cat named Gemma, one of the original Burmilla kittens.

She started the Burmilla Cat Club in 1984.

In appearance the Burmilla looks much like the Burmese.

The Burmilla can be either long-haired or short-haired.

The Burmilla cats are playful and love attention.

They can also be very relaxed and enjoy being cuddled.

This is a typical lap cat.

This cat is great for the single cat owner or a family.

The Burmilla will very much appreciate the company of another Burmilla.