If you are looking for a talkative cat, get the Burmese cat! These cats love to communicate.

They are extremely social and need tons of attention. The Burmese will follow you around from room to room. 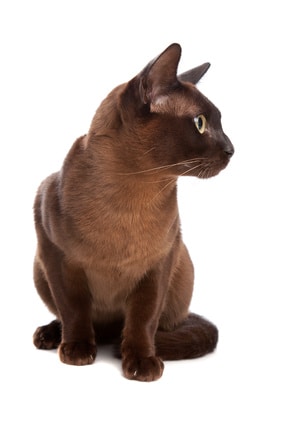 This is a cat for a true cat lover.

It is impossible to feel lonely with a Burmese in your home.

They are typical lap cats and love to be petted. They don’t appreciate being left alone.

This is not a cat for a single working person who spends long days away from the home. If that is the case you should rather be considering a British Shorthair.

The Burmese cat must not be confused with the Birman cat, which is a completely different cat breed.

The Burmese were popular cats in Buddhist temples and were considered sacred cats.

The fur is short-haired and shiny. They have a rounded head and their ears are set widely apart. The Burmese are muscular, making them very athletic cats.

Earlier all Burmese cats were brown. Many used to call them the “Chocolate Siamese”. Now they come in different colors. Burmese cats have beautiful golden eyes.

Most Burmese cats in the United States are descendants from a female cat named Wong Mau. Wong Mau, born in Burma, arrived to San Francisco in the care of a psychiatrist named Dr. Thompson. 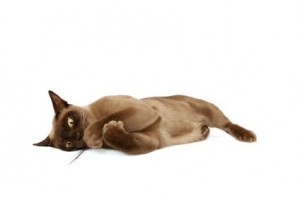 In 1932 Wong Mau mated a Siamese male. The name of the Siamese cat was Tai Mau.

A male offspring from this litter of cats was mated with Wong Mau.

Dr. Thomson was a huge cat lover and used cats when treating his patients.

He was known to give his troubled patients pregnant Siamese cats to care for.

This “cat-therapy” was an enormous success, resulting in his patients forgetting about their neuroses and gaining their mental balance.

Back in San Francisco, Wong Mau was his favorite cat.

It was reported that Wong Mau would be present and sitting by his side when the doctor was consulting patients.