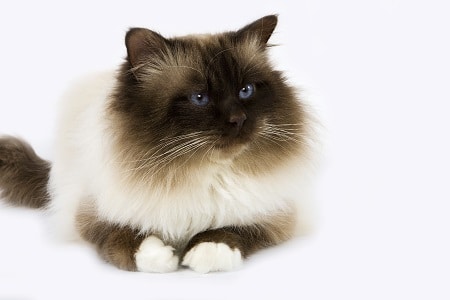 The Birman cat is also called “The Sacred Cat of Burma”.

All Birman cats are easily recognized by their pure white paws. It could seem as they are wearing white gloves.

The Birman cat has blue eyes.

This beautiful cat usually has a creamy and golden fur with dark points much like that of the Siamese cat.

The color of the fur changes as they grow. The change of color is completed after two years.

Their bodies are often large and stocky. They have short, strong legs. The head is rounded.

These cats are calm and loving. They love to be around people and may tend to follow you around.

This is a loyal cat just begging for affection.

The Birman was brought to France shortly after the First World War. They became quite popular and loved in France.

Sadly after the Second World War there were only a very few Birman cats left.

A couple of cat breeders in Germany managed to save the Birman. Some years later the Birman cat again became increasingly popular.

All the kittens born the same year will be given a name starting with the same letter of the alphabet.

In the year 2002 all Birman kittens had a name starting with the letter Z.

In 2003 all kittens were given a name starting with the letter A and so on.

The Birman is a true family cat. It is impossible not to fall in love with the Birman cat.

Legend of the Birman Cat – The Sacred Cat of Burma

Long ago before the time of Buddha there was a temple in Burma where one hundred pure white cats resided. These white cats all had yellow eyes. The temple was known as the sacred Khmer temple and was located on Mount Lunh in Burma.

These beautiful white cats guarded the most sacred and valuable image of the blue-eyed goddess named Tsun-Kyan-Kse.

The power of this goddess was of utmost importance to the priests of the temple.

When a priest died it was the goddess Tsun-Kyan-Kse who ordered the soul of the dead priest to be transferred to one of the cats. It was believed the soul had to pass through a temple cat before it was able to continue the journey to heaven. This was only pathway to paradise.

At one time the temple was threatened by barbarians from Siam. Mun-Ha was at that time the high priest of the temple.

He was old and resting in front the golden image of the goddess in company of his favorite cat named Sinh. He was dying.

At the moment of his death the cat Sinh had his paws on the head of the high priest.

The other priests who were present were totally stunned as they witnessed the miracle in from of them.

The color of the Sinh’s eyes changed from yellow to blue.

The color of the cat’s fur changed from pure white to an earth-color, with the exception of the paws.

The priests of the temple then observed that this change had not only inflicted the cat Sinh, but every single cat at the temple.

All the cats had suddenly changed as Sinh had. This was the miracle they needed to give them the courage to drive off the barbarians from Siam.

The cat Sinh stayed close to the dead high priest for seven days. Sinh refused to eat and died one week later.

The other cats then came in and formed a circle around a priest named Liao. There was no doubt about it. The sacred cats of the temple had appointed Liao to be the next high priest.