Bengal Cat – Only for the Passionate and Enthusiastic Cat Lover

The Bengal Cat is precious, exquisite cat. It certainly has that “wild-look”.

The Bengal cat is only suited for devoted cat lovers with experience. 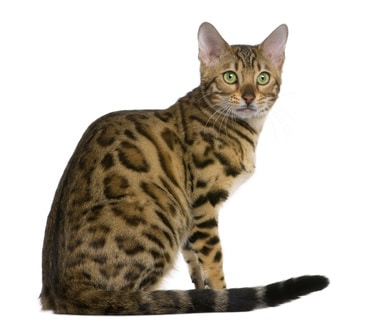 This cat is extremely active. The cat loves to run, play and jump.

The Bengal cat enjoys climbing up on high places.

A Bengal owner needs to stock up on cat toys.

These cats are in much need of entertainment.

Because of their high level of activity, the Bengals need lots of space.

A cramped apartment would be torture for the Bengal.
The Bengal cats are quite expensive.
If you are considering a Bengal cat, you need to be very careful about which breeder you choose.

The high demand and the selling price have unfortunately resulted in some unethical breeders.

The Bengal cats are large and muscular.

Their coat may be either spotted or marbled. 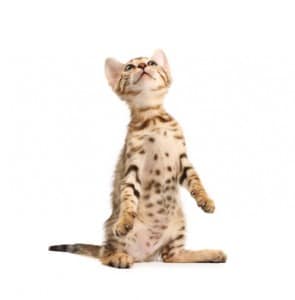 These cats are very intelligent. They are easy to groom.

Many Bengal owners have reported that their Bengal loves to play with water.

Health wise the Bengal cat seem to be immune to feline leukemia.

The Bengal cat is a cross between a wild Asian Leopard Cat and a domestic cat. It is a hybrid.

Normally hybrids are infertile, but in this case only the male offspring was infertile.

The female offspring was not infertile and was used to develop this new breed.

She had gotten the Leopard Cat from a pet store and named him Malaysia. A female kitten was given the name: Kinkin. Kinkin was later crossed back with her father.

Kinkin could have been the matriarch mother of the Bengal cats. 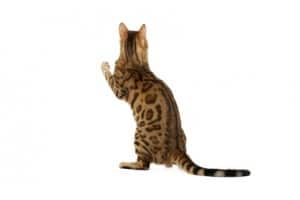 Unfortunately Jean Sugden became a widow and under the circumstances did not continue her project of developing this new breed.

Sometime later in the 1970’s another geneticist named Willard Centerwall was working on a project to study feline leukemia.

As part of his work in the program he crossed the wild Asian Leopard with domestic cats.

In the mean time Jean Sugden had remarried. Her name was now Jean Mill. She had moved from Arizona to California.

When Jean Mill heard about the project Willard Centerwall was working on, she contacted him.

She applied for some of these female hybrid cats and her wish was granted. This was in 1981. Jean Mill was back in business!

Jean Mill went to India in 1982. At the Delhi Zoo she spotted a red feral cat in a rhinoceros disclosure.

The cat was sent back to the U.S. and crossed with a female hybrid.

She also obtained a brown, spotted tabby cat from a cat shelter in Los Angles. This time around a new cat breed was developed.

Others have also crossed the Leopard Cat with a domestic cat. Gregg Kent was successful in his project of crossing a Leopard Cat and an Egyptian Mau.

The Bengal cat sold as a pet should be least four generations (F4) away from the Leopard Cat.

The “foundation cats” from the first three filial generations of breeding (F1–F3) are usually kept back for further breeding. The F is short for “filial”.