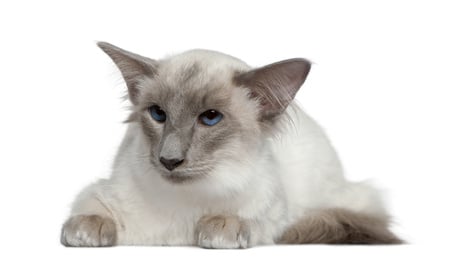 The Balinese have clear blue eyes and a long straight nose. The ears are pointed.

The head is long and wedge shaped.

Their legs are long and slender. The Balinese have long tails

The Balinese is basically a long-haired Siamese cat. This breed started sort of by mishap.

Some Siamese kittens started from time to time to appear with longer hair than they are supposed to.

In the United States a woman named Marion Dorset took a keen interest in these long-haired Siamese kittens that no one else cared about.

Taking a closer look at these long-haired Siamese, she was quite enthusiastic about the prospect of a whole new cat breed.

In the 1950’s her breeding program was established. In the 1960’s she was joined by another breeder named Helen Smith.

They were successful and a new breed of long-haired Siamese cats had come to stay. Helen Smith suggested naming this new breed “Balinese”.

The name “Balinese” was chosen because these cats are a reminder of the elegant dancers from Bali.

The name could be slightly misleading. They are not from Bali, this cat breed originated in the United Sates.

The Balinese cats are not as noisy as the Siamese, though they do tend to be more vocal than other cat breeds. They do love to play and are quite affectionate.

The Balinese do not appreciate being alone for long. They are social cats. It would be a good idea to get two Balinese cats, as they would love to have another cat to play with.

The Balinese are great family cats and get really well along with children.