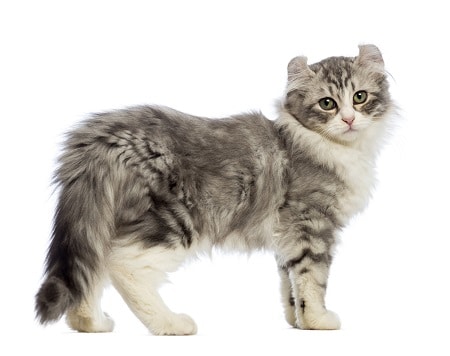 This special cat got its name because of the very unusual ears. The ears of the American Curl, as the name suggests, go backwards and bend into a curl.

The ears curl in an arc between 90 and 180 degrees, and should not touch the back of their skulls.

The American Curl is born with straight ears. Their ears start to change to a curl after 2-9 days.

When the cat is four months old the curling process of the ears has settled.

The American Curl may be either long-haired or short-haired. They come in all colors.

The American Curls are healthy cats. They have not shown any specific generic health problems.

This cat is easy to groom.

The American Curl cats are known to be extremely playful well into old age.

They love to run and jump.

These are very active cats.

They are curious and love attention.

The American Curl is a wonderful family cat that gets along great with children.

They bond easily with their owners and tend to be “helpful” with chores.

The American Curl is an intelligent cat and will soon figure out how to get things done, for example opening a door.

They need space to play and explore.

They do not like to be left alone for very long. The American Curl is a social cat.

The American Curl is a relatively new breed of cat. It all started in Lakewood, California. In June, 1981 a couple named Grace and John Ruga found two stray cats outside their house.

They decided to keep the cats. One of the cats was a black female cat with odd shaped ears.

She was given the name “Shulamith”, which means “Black but comely”. The other cat was named Panda. Unfortunately Panda wandered off after a few weeks, never to return.

Shulamith gave birth to four kittens on December 12, 1981. Two of the kittens had curled ears.

Shulamith and her two curled-ear kittens were shown in public for the first time at a cat show in Palm Springs, California in October 1983.

The response was amazingly positive.