The American Bobtail is easily recognized by its short and bushy tail.  This breed comes in a variety of colors. There are both long-haired and short-haired Bobtail cats. 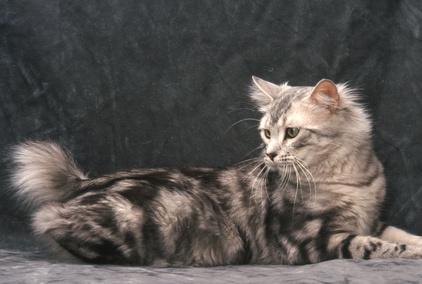 Other features include a broad head with large eyes. The front legs of the cat are a little shorter than the back legs.

These cats are born with short tails. The tails are normally between one and four inches long.

In the feline world the tail has an important function. All feline animals use their tail to keep their balance.

The American Bobtail is handicapped by its short tail. This breed does not enjoy climbing.

As we can imagine climbing up on really high places must be a pretty scary experience when keeping a perfect balance is unrealistic.

Only the few brave ones will take the extreme climbing challenge.

American Bobtail cats make awesome pets for families with children. These cats love to be around people.

They seem to be very patient with children.

This is the cat breed you may want to consider if you have or plan to have other pets in your home.

This dear feline gets along great with people young or old as well as other animals in the household.

The American Bobtail may not be a good climber, but does compensate with other amazing talents.

This cat is the “Houdini” of the cat world. It is magically to witness narrow and tight places the Bobtail succeeds to escape from!

Many claim this breed is “dog-like”. This may perhaps not be considered a compliment among the felines. But in all honesty these cats simply love to play “fetch”.

These cats are intelligent and very sensitive to the moods and temperaments of the humans they live with.

The American Bobtail will respond to the mood you are in. You cannot put on a “brave face” and try to mislead this cat.

The American Bobtail can always tell when you are feeling down. The sweetest thing is that this cat will try it’s hardest to “comfort” you!

The most common belief is that the American Bobtails are descendants of a stay male tabby kitten found in Arizona.

Brenda and John Sanders happened were on vacation in Arizona and decided to adopt the stay kitten. They named the kitten Yodie.

Nature took its course and Yodie later mated with Mishi, their Siamese cat.

As it turned out some of the kittens in the litter had unusual short tails.

To make a long story short Yodie and Mishi became the founding parents of a new cat breed.

A friend of the couple suggested the name “American Bobtail”.