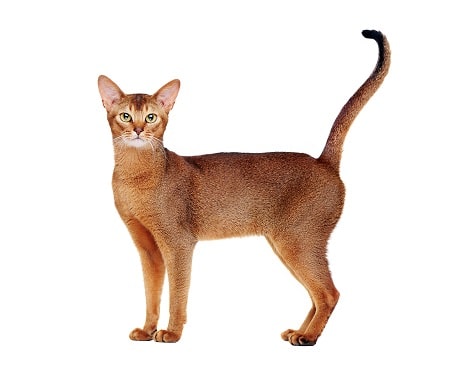 The Abyssinian cat is an elegant and beautiful cat with large ears and almond-shaped eyes. It has a slender body and a long tail. The Abyssinian  is medium sized and has strong muscles.

This short-haired cat has normally three shades of color; each of the hairs has different brands, the darkest color closest to the tip of the hair.

The Abyssinian  is an active, energetic and playful cat. This is a cat that does not always like being handled and is not your typical lap-cat.

The Abyssinian is an extremely intelligent cat; a proud and freedom loving cat.

This cat breed is strong willed. The cat is curious and loves to hunt. People with tons of breakable valuables on display should not consider the Abyssinian cat.

This cat loves to play. The cat owner should stock up on cat toys.

This is for cat lovers who appreciate and love the active and intelligent cats.

This cat loves attention and does require that you have time to talk to and play with your cat.

The Abyssinian is a loyal cat and tons of fun!

The Abyssinian cat is easy to groom. It only requires brushing about once a week.

History of the Abyssinian Cat

It is told that the Abyssinian has its roots from the Far East, but how the cat received its name is a completely different story.

The Abyssinian cat got the name from Abysinnia, which is now present day Ethiopia.

One story goes that the Emperor of Abbsinia named Tewodros (Theodore) II (1818-1868) had asked the British Consul, named Cameron to deliver a letter to Queen Victoria asking for assistance in keeping the Muslim increasing threats under control.

He specifically appealed for experienced workers to assist him in producing firearms.
Cameron travelled to England and delivered the letter to the Foreign Office. The letter was filed and forgotten.

The Queen never received the letter.

Two years pasted and the Emperor had not received a reply.

By then he was furious. He also found out that negative reports on his ruthless rulings had been published in Europe.

The Emperor took Cameron and other British citizens’ prisoner.

Britain responded by sending troops to Abyssinia to fight the harsh regime of the Emperor.

To make a long story short the British troops attacked and the Emperor committed suicide on April 13, 1868.

Paradoxically he used the gun he had received as a gift from Queen Victoria.

The conflict ended when the Emperor died.

This version of the origins of the Abyssinian cat goes on to tell that before leaving back to England, some soldiers found a cat that they absolutely adored.

The cat (or cats) accompanied the soldiers back to England. The first Abyssinian cat had arrived in Europe.

Some say it was the wife of Captain Barett-Lennard who brought the cat back in 1868. The cat was named Zula.

Zula was also the name of the port in Abyssinia where the British establish a base in 1867.

Some people insist that the Abyssinian  has royal blood dating back to the Ancient Egypt.

The cat certainly bears a resemblance to the cat drawings of ancient Egypt.

Maybe the Abyssinian was once worshipped as a god or goddess and has never forgotten it.